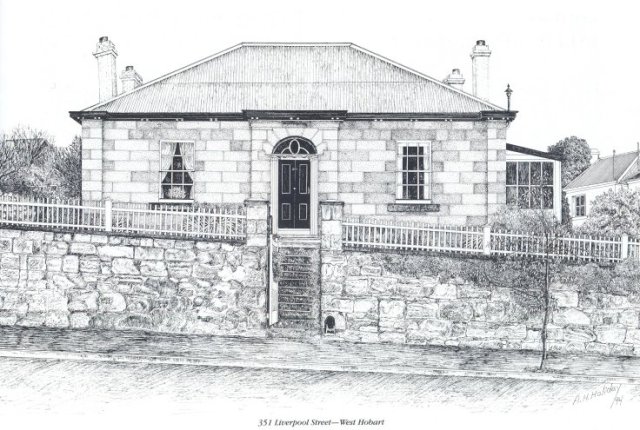 Jeremiah O’Sullivan was an early builder in Hobart Town who decided to try something different. He became a publican. You can still see his pub, The Spotted Cow, in Liverpool Street. Today, it’s a house and it sits there basking in its most un-pub like, but happy, coat of Suffolk pink paint.
A few doors up the street is a very neat example, built in 1845, of what Jeremiah could do as a builder. 351 Liverpool Street-it is not known ever to have had a name-stands tall, elevated from the street level and with the appearance of a single-storey building; in fact, there are three levels in this compact, early Victorian home.
James O’Sullivan, son of its builder, was the second to own it but, like so many of his fellow Australians, he was drawn to the mid-nineteenth-century, Californian gold rush. He never came back, dying there without making a will, so No. 351 passed to his step-sister, Mrs. R. L. Bennison, the wife of a Hobart Town solicitor.

The house had a number of owners and tenants between that time and 1965, when it was bought by its present owner, Geoffrey Stilwell, well-known historian and Curator of the Allport Library and Museum of Fine Arts.

Not unexpectedly for a house just under one and a half centuries old, it has collected its share of stories. For example…The house was built into a steep hillside, and there is an excavated semi-basement below the level seen from the street. Steps lead from ground level down to a courtyard of flagstones and a door into this lower area. Rear windows of the storey above are, of course, above ground level, and on one occasion, some time after the turn of the century, a teacher at St. Michael’s Collegiate School,

Miss Dora Chambers (later to become Anglican nun, Sister Dora Beatrice) found herself locked out but saw a rear first floor window open. Using a piece of timber to hand to bridge the chasm, she intrepidly “walked the plank” to the open window without falling onto the flagstones, three metres below.

Then there was the time when the sister-in-law of the resourceful Miss Chambers was using a small service-lift which used to transport meals from the basement kitchen up to the dining room. On this occasion, the food was being conveyed in Mrs. Chambers’ best dinner service, when the rope broke-with disastrous results! Some time after this, the service lift was removed, almost without trace. The only evidence of its one-time existence is a slight change in floorboards where the lift entered at the dining room level.
The uppermost rooms of 351 Liverpool Street are not visible from the street. There are two of them with their dormer windows facing the sun at the rear of the house. One is the largest room in the house.
All rooms are simple and dignified, and those on the ground- floor level have classical, early-Victorian fireplaces with cedar surrounds; in fact cedar, that tasteful and durable wood, is everywhere-in doors, doorways, skirting boards and the balustrades of the stairways. It typifies the house generally-a place of good taste, but always a building to be lived in and enjoyed.
At the front gate, set into the solid stone wall next to the first step, is a reminder of how the years have changed the area surrounding No. 351. It’s an iron boot-scraper, but nowhere in sight is there anything which wet weather could turn into mud.

Mansions, cottages and All Saints: residences and churches, the heritage of Greater Hobart, Tasmania