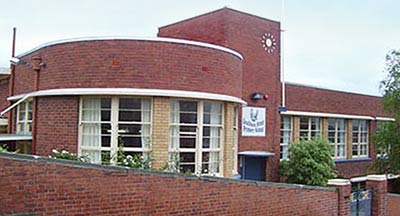 Goulburn Street Primary School is located 10 minutes from the heart of Hobart.
It has approximately 180 students in classes ranging from Kindergarten to Year 6.
Having celebrated over 150 years of public education, its classrooms are situated amongst interesting play spaces and sporting facilities.
Highly committed staff deliver exciting learning programs where students are encouraged to achieve high educational outcomes, become independent learners and develop confidence and skills that continue throughout their lives.

MERCURY January 27th 1887
This school which was opened on Monday last, is one of the best appointed in the city. It stands on Forest Road, a little distance above St John’s Anglican Church, and the view from its windows is a fine one.

There are in it three very large classrooms with lavatories, and the headmaster’s and mistress’ rooms and caretaker’s quarters attached. At one end of the building, it was found necessary owing to the fall of the ground to fill up a large space, which is retained in position by a retaining wall. At the other end of the excavation about 10ft in depth at its deepest part was made to give the edifice a level site. Even with that the ground level at one end is several feet below that at the other end, and in order to bring the floors on one level a space 60 x 23 ft has been enclosed with brick arches, which support the super-incumbent wall of the large schoolroom. The recess thus formed has been floored with asphalt, and provided with two fireplaces for use in cold weather. This at present forms a playshed for boys but in wet weather it is intended that the girls shall share it with them.
The floor of the schoolroom above is supported on four iron columns. This schoolroom is of the same size as the play shed below, viz, 60 x 23ft and is 21ft in height. Adjoining t is another schoolroom 45 x 23ft and the same height as the first. Both these schoolrooms open into a classroom, which may either be used for boys and girls as may be found necessary. A lavatory adjoins the room which is fitted with only one basin for washing purposes, though there is ample space for several more. The walls are furnished with hat and coat hooks. Just below these rooms are the caretakers quarters. A wide corridor divides this portion, which forms the main building from the Infant School, which is, so to speak, a wing of the building. Above the corridor, at the Forest Road entrance the bell is rung at an elevation higher than the ridge pole of the roof and the ringer has to mount a staircase to reach the belfry.

The Infant School is 39 x 20ft, and contains a gallery, fitted with six tiers of seats, 14 x 16ft. The space beneath this gallery can be used for storing books etc. At the back of this room is another classroom, as well as the master’s and mistress’ room. The master’s room is so situated that the view from the window commands the whole playground. In all there are nine rooms in the building devoted to school purposes. The internal finish is by no means ornate, but it is neat; a pine dado extends round every wall at a height of 4 ft 9in from the floor level, and ventilation is provided for by what is known as Lobins system.

The dados are simply varnished, consequently they show all the grain wood, and the walls above are plastered and painted French Grey, which harmonise very well with the yellowish white of the dado. In all except the infants rooms the ceilings are of the kind known as open rafters; in the infants room the rafters are hidden. All the apartments except the masters and mistress rooms are provided with fireplaces. The floors are of Tasmanian hardwood, 4 x 1¼in, and though the have been laid 12 months they do not show any signs of shrinking. The external walls are faced with pressed bricks from Mr Shields kiln at Knocklofty.

The dressings are of brown stone, which by the way, is the substance of which the mantelpieces inside are fashioned. Sand and gravel is thickly laid over the playgrounds, which are divided from each other by a close wooden fence. A palisade prevents the children from falling down the face of the retaining all. The Forest Road approach to the school is up a steep hill, which art has left pretty much to nature to improve while the Goulburn Street approach is composed of black soil, which in wet weather will seriously mitigate against clean boots.
A splendid fence encloses part of the grounds, but on two sides of an angle on the St John’s Church side is a very dilapidated paling fence with holes in it big enough to admit a cow. It is a pity that with such a complete property the fence cannot be made good all round, and Goulburn Street approach made rather more in keeping with the requirements of the place.

Mr H Hunter was the architect and the design of the building reflects great credit on him. The contractors were Messrs Stabb Bros, who have carried out their work excellently well, Mr Rollins did the plumbing work, Mr J Gormly the painting and Mr Grimmond, the plastering. 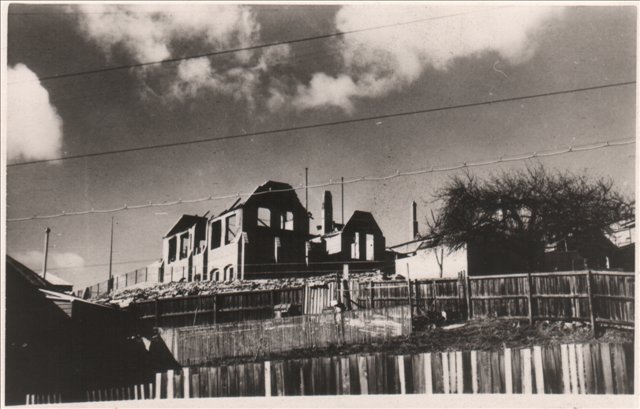 Goulburn street school, Hobart, was destroyed by fire early on Saturday morning. More than 300 children in the West Hobart district are affected but arrangements for their continued education are being made. 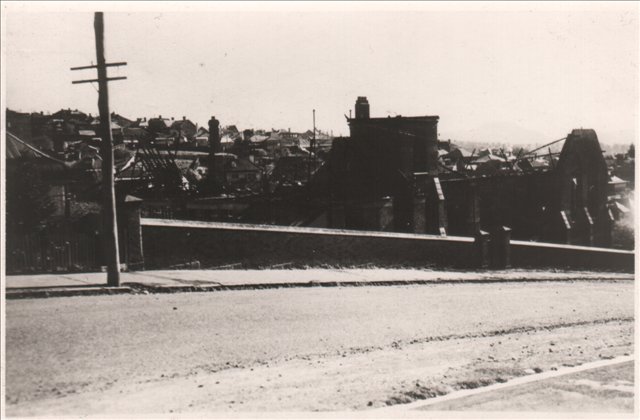 Within a few minutes of the notification of the fire at 3.25 am nearly 30 calls were received by the Hobart brigade and three fire engines were dispatched.The school was ablaze from end to end. Flames were shooting through the full extent of the roof, which soon after fell with a roar, accompanied by an uprush of fire. Driven by fury of a north-westerly gale the fire surged towards Forest Road which became carpeted with embers. Sparks and embers, whirled before the wind, threatened to extend the fire, and before the roof collapsed flying slates were a menace to firefighters and others. So powerful was the gale that the first streams of water played on the fire were whisked away before their nearest objective.

Auxiliary fire patrols were called up from Sandy Bay, South Hobart, Battery Point, City and West Hobart. Realizing that he school was doomed, the superintendent of the brigade, Mr Skinner, directed his forces to the protection of adjacent property, particularly weatherboard houses on the same side of Forest Road above the school and houses in the track of the wind and fire on the other side of the road.

Amongst the latter was the residence of Mr and Mrs Alan Wilson. The rapidity with which the fire took consuming hold is indicated by Mr Wilson’s comment. “At 3:20 am” he said “my wife roused me and said the school is on fire. The middle section between the two wings was alight. I dressed quickly, an went outside. By then the whole building was enveloped in flames”.
Using 4,000 ft of hose, connected to mains in Forest Road, Cain Street and Goulburn Street, the fire fighters maintained a curtain of water between the school and other menaced property, and poured water onto the school, by that time little more than a red hot shell.

Informed of the fire within a few minutes of its outbreak, the headmaster (Mr A.A. Vollprecht) whose home is at Lenah Valley, joined the firefighters. The water attack was concentrated on the school office on the main floor where most of the classrooms were grouped. By good fortune, aided by the fact that the office had a skillion roof of iron, this room withstood the intensity of the fire, and when the fire was under control it was possible to salvage the school registers, daily record, and other official records, damaged only by water.

The school library and gymnasium, in the basement on the windward side of the fire, also escaped fire damage.

While the school office was spared, the teachers common room adjoining it was gutted with the rest of the building.

The Infant School, 30 yards from the main building, was untouched by fire.

As added precaution against the fire spreading, police man patrolled surrounding streets and warned householders to close windows to prevent the lodging of fire particles borne by the wind. The intensity of the heat burnt through electric light crossover wires in Forest Road serving the school.

The part played by the Civil Defence Legion was not restricted to that contributed by the auxiliary fire patrols.

About 6 am when it became possible to investigate in detail the extent of damage there was still grave danger of walls and chimneys collapsing. The chief Air Raid Warden for Hobart (Mr Murphy) was asked by Mr Skinner to send demolition squads to deal with portions of the school building left standing but likely to crash. The remains of the bell tower, several chimneys, and a brick gable-end swinging in the wind amongst other dangers, made this necessary. In quick time, rescue parties from Elizabeth Street and Domestic Arts (Murray St) depots, under the leadership of Messrs T.G Neave and C Gillham were at work. Mr Murphy was joined by the chairman of the CDL rescue parties committee (Mr T Platt) in supervising the demolition.

Subsequently special constables patrolled the environs of the burnt-out building to control the crowds of onlookers and to direct them and passersby away from places considered still dangerous.

Minor injuries were suffered by the fire fighters. Station Officer Crisp was treated for a lacerated hand, and fireman J Olding for eye injury caused by the intense heat.

Mobile canteens operated by members of the WATC and WAANS under Miss Joan McLennan and Mrs C Oldham respectively, were in action at 7 am supplying hot drinks and food. Earlier in the morning Mr J.A. Tate of Goulburn Street provided firefighters with tea.

No evidence was forthcoming as to where and how the fire started. The rapidity with which it gained it’s hold was attributed by Mr Skinner in large measure to the fact that practically all rafters, joists and classroom wall linings were of pine, as also were roof battens. This material would flare and burn like matchwood,  he said.

Never in his experience, he said, had the brigade been called on to fight a fire under such tempestuous conditions. The entire absence of shingle roofs in the vicinity had safe guarded surrounding properties.

Fires were lighted in classrooms on Friday morning, said Mr Vollprecht, but none were made up after lunch. The caretaker of the building at 6:30 pm saw that no fires were alight, and turned off the main switch controlling all the radiators.

The Director of Education, (Mr Brooks), accompanied by the Secretary for Education (Mr Fletcher) conferred with Mr Vollprecht about the educational problems caused by the fire. He said subsequently it was intended to use infant school which would hold 120 children, and, with the consent of he church authorities, the school room of St John’s Church, Goulburn Street, with room for 200 to accommodate scholars on the school role. I would not be practical to reopen in the emergency premises today, but, subject to necessary arrangements this will be done tomorrow.

On the question of insurance of school properties controlled by the department, Mr Brooks said that if insurance were effective on schools throughout the state, premiums in the aggregate would average about £5000 annually. Since losses to the department by fire average £100 annually, it was obviously to its interest to carry its own insurance.

The school, estimated to have a value of £10,000 was built about 55 years ago and  is ranked number 3 on the department list of school buildings.