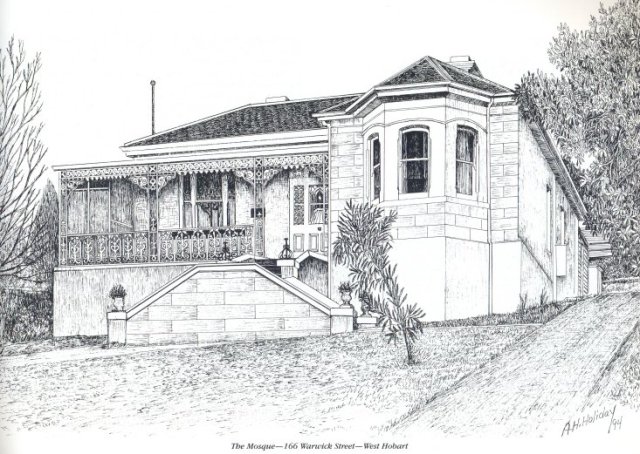 The Muslim community in Tasmania is estimated to be about 900 strong, with 600 living in Hobart. The first Mosque in Hobart was established in a house on Proctors Road, in 1973. Later, in the same decade, it moved to another house in Fitzroy Place.

The present Mosque, in this late-Victorian house which was built near the end of the nineteenth century, has been there since 1985. In its day, the large house, which once bore the name of Roseneath, has been a private school and also a nursing, as well as a private, home. One of the longest occupations was that of Samuel T. Burleigh who took up residence during the First World War in 1917, and stayed there until he moved to a house in Sandy Bay Road, in 1933.
The Mosque is generously supplied with land, sitting in about a quarter of a hectare. Two large, very old willows grow near the footpath and behind them is a vast, grassed area, bordered by part of a nineteenth-cen¬tury box-hedge on one side. Beside the house are a number of old fruit trees, and there are the remains of a tennis court at the back-used these days as a car park. A number of outbuildings stand at the rear, and one of these is an apartment for the resident Imam, the man who leads public prayers in the Mosque.
In true Victorian style, the front door has leadlight panels within and around it, but these have been fashioned by a member of the Muslim community and embody Islamic themes. Inside is a broad, long hall intersected by a pillared arch about a third of the way in. At the beginning of this hall stands a pulpit, virtually a series of four carpeted steps, from which the Imam speaks on Fridays, the day of community worship. On these occasions, a congregation in the vicinity of 150 people attends filling the hall and adjoining rooms.
Although the house has been modified for its new role, many touches of Victoriana are still there. The deep cornices and elaborate ceiling-roses have been painted white, but they still impress, as do the tall skirting¬boards and deep bay-windows. Almost all of the lighting has been replaced by neon strips, and fireplaces have been modernised.
The front, right-hand room is the main prayer room for men. It faces roughly in the direction of Mecca, but the prayer mats, also donated by members of the community, have been exactly positioned. A representation, in wood, of the Arabic word for Allah has been affixed to the front wall and, on the windows of this room and others there are religious stained-glass motifs in praise of God. This first room also has an exquisite chandelier of Victorian design looking very much in place, although not original. It was donated to the Mosque by a community member.
All of the right-hand rooms are for men. Behind the prayer room is another, also with its prayer mats, and behind that, a tiled room with four hand-basins-an important place because ritual cleansing is an important part of preparation for worship. On the left-hand side of the building there are two prayer rooms for women, and that part also has its annexe for cleansing. Behind these rooms is a library containing Islamic books, magazines and other literature.

And so this old, Victorian gentleman’s residence has made an interesting and easy transition to a house of worship and prayer.

Mansions, cottages and All Saints: residences and churches, the heritage of Greater Hobart, Tasmania

The new Mosque at the rear