The only street name in West Hobart that I can speak about with any confidence is Cavell St. Originally this was named Princes St and was one of thousands of King, Queen, Prince, Princes, Princess, George, Victoria, Albert, Edward, Albert streets/roads/avenues etc all over Australia and other former British colonies & dominions.

Sometime in the 1920s Princes St, West Hobart was changed to Cavell St at the instigation of the (then) Lord Mayor of Hobart (later Sir) Eccles Snowdon. There is quite a story about this, and I researched it in connection with a documentary I made about 12 years ago. From memory it goes like this….

Eccles Snowdon enlisted in response to the call-up for the Great War. He was made an Officer and fought on the Western Front where he was seriously injured in battle, being then removed to a military hospital in neutral Netherlands. While there he came in contact with a British nurse Edith Cavell who held a position of some responsibility.

Germany had long suspected that the hospital was part of a pipeline assisting displaced allied soldiers find their way back to England, and finally took action to close off this escape route. Edith Cavell was taken prisoner and found guilty of assisting the enemy, a capital offence during wartime. She was sentenced to death, and despite vehement protests and expressions of outrage from all quarters, the sentence was carried out by firing squad.

Upon his eventual repatriation to Hobart and attainment of high office, Eccles Snowdon urged that the memory of Edith Cavell should live on in Hobart in the form of a street name. He proposed that Princes St should be renamed Cavell St because that’s where he lived.

Some details may have escaped my memory and I’d have to watch the documentary again to re-aquaint myself, but that’s the story as I recall it.

Finality was reached at last night’smeeting of the City Council with respect to the changes in the names of streets which are duplicated in Hobart, New Town, and Queenborough. The PublicWorks Committee submitted the following amended list of names for approval.  The first column contains the names of streets which are duplicated, and the other columns the names in the three  districts by which those streets are to be known in future.

Alderman Valentine said the report  previously prepared was held up pending the amalgamation of New Town with Hobart. The duplication of street names had caused endless trouble, and he thought the proposed changes would obviate this. He moved the adoption of the recommendations.

Alderman Lord said that when they knew that the fire brigade frequently went to the wrong end of the city because of the duplication of streets, they would recognise that it was time the changes were made. The suggested alternative names all had reasons behind them, and he thought the changes would be acceptable.

Alderman Rogers suggested that the names of Tasmanian-born who reached the highest pinnacles of their professions, such as Justices Giblin, Clark,and Dobbie, should be perpetuated by calling some of these streets after them.

Alderman Arnott asked how these changes would affect deeds of property?

The Mayor said that, if the changes were officially notified to the Lands Titles Department, the alterations wouldbe made in the deeds of titles without expense.

Alderman Soundy said that, unless finality was reached, the question of changing street names which were duplicated would be like the selection of a noxious trades area. He was glad the street he lived in was to be called after Sir Francis Newdegate, who was one of the best Governors Tasmania had ever had.

The report was adopted, with the exception that Forster Street, New Town, was altered to Giblin Street. 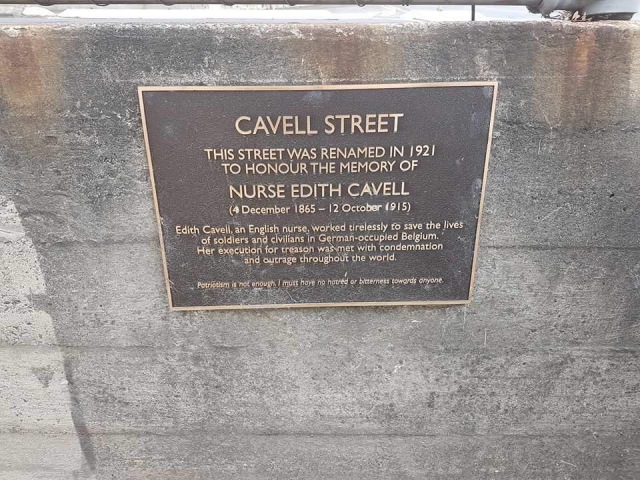 Plaque to honour Edith Cavell at the eastern end of Cavell Street.